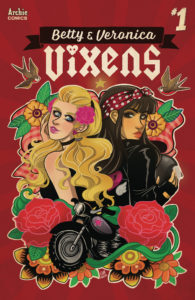 In the past several years, Archie Comics has unleashed a variety of elseworld-style titles that take their archetypal characters and throw them into premises they would never encounter otherwise. The aforementioned Afterlife, for example, turns Riverdale into ground zero for a zombie apocalypse. Chilling Adventures of Sabrina (soon to be adapted into another CW series!) is a supernatural horror tale featuring the eponymous teenage witch. And if you’ve ever wanted to know what would happen if Archie’s best pal somehow became a bloodthirsty werewolf hunted by a Buffy-esque Betty, then Jughead: The Hunger is for you.

But they’re not always so outlandish, either. The 2015 reboot started by Mark Waid and Fiona Staples —simply titled Archie— frames the town of Riverdale as a Saved by the Bell-esque teen comedy, with spinoffs like Josie & The Pussycats and Reggie & Me following in that vein. The point is that Archie Comics are more varied and esoteric than people may assume.

Betty & Veronica: Vixens seems to take a few cues from Riverdale, namely with its focus on the Southside Serpents gang causing trouble for citizens of the sleepy town they call home. But whereas the series is very obviously inspired by the melodrama of Twin Peaks, Vixens combines its emphasis on the Serpents with a classic Archie aesthetic.

It’s not totally clear when this series is meant to be taking place; the fashions and low-tech world established throughout the issue lend a sense of timelessness you’d expect from an Archie comic, but with a modern, female-centered sensibility. I could easily see fans of Riverdale take to this more than the Archie reboot, or even the tie-in comic set in the world of the CW series.

It’s worth noting that Betty & Veronica: Vixens has an all-female creative team. While writers and artists of any gender can work on any character they want, the proof of authenticity is often in the pudding. Adam Hughes’ recent Betty & Veronica series was met with lukewarm reception, particularly for its portrayal of the titular female characters. Again, anybody can work on any character they want, but middle-aged men are perhaps not the ideal people to write a comic about teenage girls–unless they’ve proven an aptitude for it.

Writer Jamie Lee Rotante definitely puts a focus on the friendship between our two protagonists, which Hughes handled a bit more clumsily in his series. Though they’re often shown fighting for Archie’s affections, they’re much more interesting together when he isn’t part of the equation. In fact, the redhead doesn’t even show up in this issue until the ninth page, and even when he does show up, his presence is tangential to the plot. Vixens is about Betty and Veronica first, and boy problems second.

Eva Cabrera’s art is also an improvement on the material from Hughes’ portrayal. That’s not to say he isn’t a good artist —because he is good— but again, it’s a question of a creator’s appropriateness for the material they’re tackling. Hughes is well-known for his cheesecakey illustrations of women, and his Betty & Veronica was tonally weird because of it. Cabrera, on the other hand, draws each girl with a youthful energy that fits both characters. I first encountered Cabrera on Black Mask’s Kim & Kim (which I once reviewed here), which is a very different kind of story with similar sensibilities that ultimately make her a good fit here.

The all-female creative team is rounded out by colorist Elaina Unger and letterer Rachel Deering, who both contribute good work. Unger’s colors in particular trend toward the flatter side, but that’s not inherently a bad thing; it helps denote the classic Archie aesthetic that visually differentiates Vixens from some of the more modern-looking art of current Archie Comics. Deering’s letters, on the other hand, are easy on the eye and make reading Rotante’s script straightforward and enjoyable.

Verdict:
Buy it. If you’re a fan of its eponymous characters, or just the Riverdale world in general, then Betty & Veronica: Vixens #1 is well-worth buying.

Josie and the Pussycats #3 Review