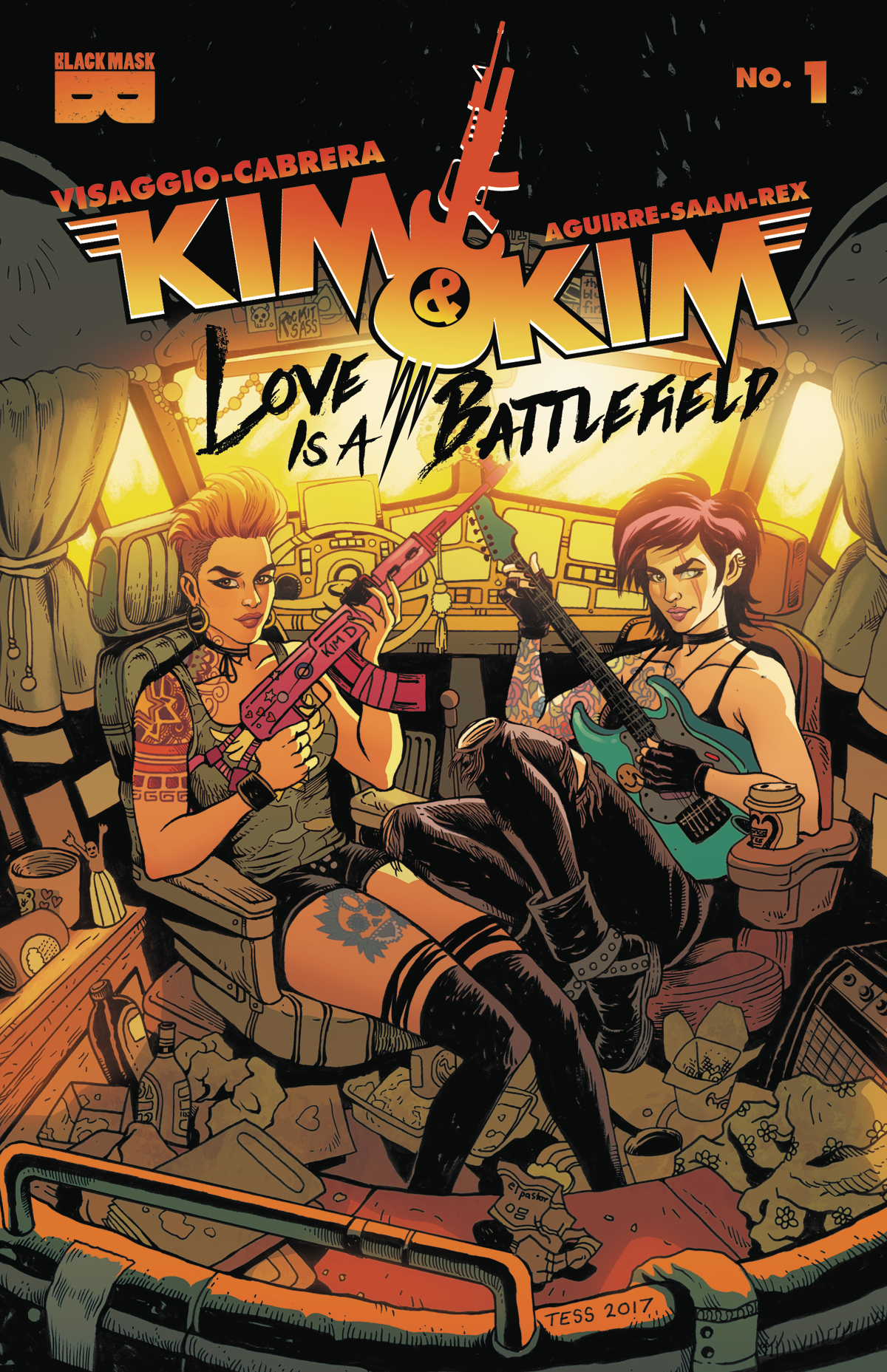 Picking up three years after the events of Kim & Kim, Love is a Battlefield reacquaints us with our eponymous bounty hunters as they’re finishing yet another job. Have those three years of experience them any wiser? Well…

Aside from Kim D’s slick new pompadour and a strategically-placed scar around Kim Q’s left eye, it seems neither has changed very much since we last saw them – Kim Q still rushes into trouble without thinking, while Kim D remains the reasonable (but not too reasonable) authority figure between them. Their dynamic was a major factor of the original series’ success, so it’s a relief to know they’re still the same people they were when we left them.

This time around, Love is a Battlefield introduces us to Kim D’s ex-girlfriend Laz, who she absolutely did not split from on good terms. It’s perhaps no shocker when we learn there’s a very good reason for her presence in this story aside from mere expansion; let’s just say that sometimes it isn’t better the devil you know. Especially when there’s a hefty price tag involved.

(And then there’s the matter of Kim Q’s relationship woes with rival bounty hunter Saar, who she has her own unresolved issues with…)

I’m a big fan of writer Magdalene Visaggio’s work, so the return of Kim & Kim is a more than welcome one. She has a real knack for worldbuilding; it’s a science fiction-flavored Mad Max: Fury Road, but without the patriarchal dystopia and more emphasis on Immortan Joe’s flaming guitarist… if he were a queer female bounty hunter, and there were two of him. If that premise doesn’t sell this comic to you, I dunno what will.

There’s a real attention to characterization here, too. Both Kims are fully fleshed-out people with clear motivations and desires, and Visaggio’s dialogue makes us believe their emotional (and sometimes physical) intimacy. They’re very much two sides of the same coin in a way that defines all the best double-acts in fiction.

Also, representation! As discussed in the afterword by Elle Collins, the universe Kim & Kim occupies is very, very queer. Both of our heroines fall under the LGBTQ umbrella – Kim D has an ex-girlfriend, while Kim Q is trans. Since Visaggio herself is both of those things, it’s not a surprise she would write characters based on her own experience as a trans woman.

The art of Kim & Kim is just as crucial to its success as Visaggio’s script. Artist Eva Cabrera, colorist Claudia Aguirre, and letterer Zakk Saam all return from the original volume, lending a sense of familiarity to established readers of the title. But for any newbies jumping onto Love is a Battlefield with this #1 issue (which you certainly can!) their contributions should come as a welcome discovery.

Cabrera is great at drawing the many action scenes littered throughout Love is a Battlefield #1, but just as effectively renders the quieter moments with the delicacy they deserve. Her art also contributes to Visaggio’s worldbuilding, illustrating a world that seems kinda familiar to ours, but alien enough to feel separated and different.

Aguirre’s coloring is another asset to the book, providing some of the most vibrant colors you’re likely to see in a comic anywhere else: lots of naturalistic lighting and gradients, with a neon-tinged twist. Saam’s lettering presents Visaggio’s script cleanly and economically, which can be tough in an action-heavy series like this one.

The Verdict
Delivering all the same thrills of its predecessor while still feeling new and fresh, Kim & Kim: Love is a Battlefield #1 demands your attention – or else.