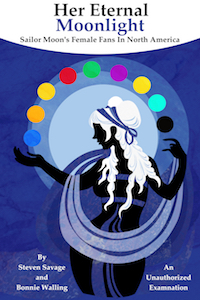 Sailor Moon hit American shores in the 90’s, introducing women to the titular Japanese superheroine and her friends. A fixture in pop culture for decades, Steven Savage and Bonnie Walling decided to ask how the anime/manga phenomena had affected women in North America, and Her Eternal Moonlight was created!

In a series of interviews with over 30 fans, Steve and Bonnie explored just what Sailor Moon meant to them, how it changed their lives, and what effects have endured to this day. What emerges is a remarkable story of a modern fairy tale that inspired and affected women to this day, and whose influences may be even wider than they seem.

Join Steve, Bonnie, and a wide range of fans in a journey through the world of female Sailor Moon fans whose lives were changed. A tale of an imperfect heroine with perfectly human flaws, of a media phenomena that was more than it seems, and a case of perfect timing that changed lives and culture.

Take a voyage back to the 90s and into the future to discover what Sailor Moon meant for her female fans and how her influence affects many of us to this day!

Amelia Wellman
fatal_frame_chick@live.com
I read, I write, I play videogames, Ghostbusters is my favourite thing in the known universe, but quasars come in at a close second. I've been known to cry at the drop of a hat over happy and sad things alike. I've also been known to fly into a rage if things don't go my way, leading to many a fight in high school and breaking someone's nose on the TTC one time. I'm an anxious introvert but also a loud-mouthed bad influence. Especially on my cat. He learned it from watching me, okay!

One thought on “First Looks: Her Eternal Moonlight”