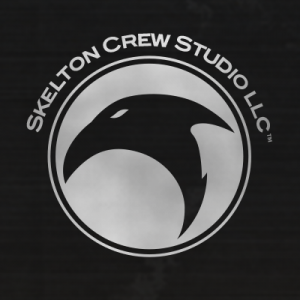 Skelton Crew Studios is hands down one of my favourite places to get geeky merch from. They’re very selective in the licenses that they take on, but you can bet that if they do take something on, it’s going to be freaking great. Depending on where your comic book interests lie, you may recognize what Skelton Crew Studios has been done in the past, like the replica keys from Joe Hill and Gabriel Rodriguez’s series Locke & Key or Chog from Rob Guillory and John Layman’s series, Chew.

I had the chance to chat with Israel Skelton, founder and owner of the company and ask him a few questions about what it is that he does. Check out his answers below and don’t forget that when you’re done reading, to go check out all of their awesome products for sale on their web site.

You have a background in sculpting and metal work. How did you start with those crafts and what made you decide to turn to creating unique comic book merchandise?

I’ve always sculpted ever since I was a little kid and I used to work as an amateur gold and silversmith in my 20s. I made 1:1 prop replicas for myself for years (Thor’s Mjolnir, Beta Ray Bill’s Stormbreaker, Ant Man’s helmet, a life-size Silver Surfer Surfboard that’s still in my living room). When a friend lost his job suddenly and decided to spend that summer organizing a comic con up in Bangor, Maine, he asked me to bring my props to fill up table space for him, and with a lot of reluctance I did. (They’d really just been personal projects.) That’s where I met Joe Hill through mutual friends. After we hit it off, he asked me to make the Ghost Key for the folks at IDW that year for Christmas.

After quickly getting hooked on “Locke & Key,” I had plans to build the other keys anyway. And if I wanted them, other people probably wanted them, too, and ultimately the studio was born that way.

What was your first license and what was going through your mind when you got it? 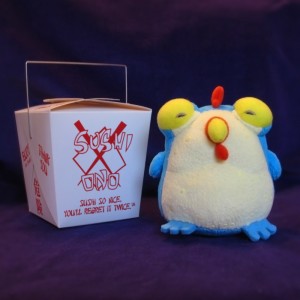 “Locke & Key” was first in 2010. As soon as we signed, I felt like the pressure was officially on to hit Gabriel Rodriguez’s lines. He puts a lot of detail into drawing each piece, and every prototype was sculpted or carved by hand back then – these were the days before mainstream digital sculpting – so there was a lot of internal pressure to make sure I got everything right and did his amazing work justice. 2011/2012 was huge: The studio signed “CHEW,” “Mouse Guard” and “Hellboy”/”B.P.R.D.” all within six months of each other through a mix of hustle and amazing good fortune.

Your work on Joe Hill’s Locke & Key line was what first drew me to Skelton Crew. What is your process for bringing the keys to life? 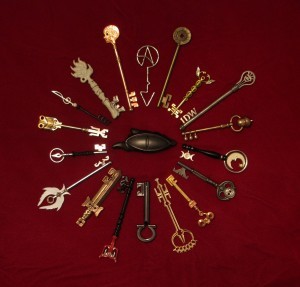 We talk with Gabe and he sends us control art and he gives me the key in a lineup with all the other existing keys so I know how it relates in scale, which determines the size. From there, I figure out how much to up-sculpt it to allow for mold shrinkage, and then I go to town. Every key is different. Some keys have been entirely crafted out of metal, some are a mixture of metal and clay. It all depends on what it’s going to take to pull that key off. From there, it goes through two sets of molds for pre-production and production and then we hand-clean finished product before plating.

When producing a run of something, how many do you typically make to test the waters?

We really don’t take that approach for sell-ability – once we’re in, we’re in. Our first few keys were limited to 500 and we discovered that wasn’t enough, so we’ve bumped it to 1,000 in some cases. Our edition size as been as low as 250 for some pieces like the Chonk from “CHEW” and will be as low as 50 for our next “B.P.R.D.” release, the Troll Witch’s Spoon.

What are the easiest parts and the hardest parts of your job?

Is this a trick question? I used to feel every now and then that “this will be pretty easy to pull off,” only to be proven wrong. Everything has challenges. The design phase is probably my favorite, sitting down and letting the design develop. I see things in three-dimensions really easily – I’m able to visualize something in the round – so making that leap from 2D to 3D is fun. 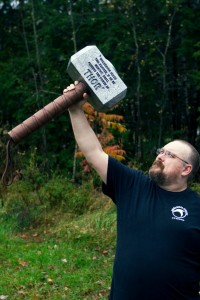 You very clearly love what you do, so in addition to living your dream job, what are some of the personal rewards?

Getting work into people’s hands and having them drop us a line telling us how much they dig it, or posing the key/sword/Chog with their cat on Twitter or Facebook never gets old. That feels nice. I’ve also met so many cool people doing this work. I’ve been very fortunate to meet and work with all-around great people in the industry. If there are jerks in comics, I’ve been lucky enough to not cross paths. I hope to keep it that way.

How many projects do you typically take on at any given time?

It’s tough to say – we could be working on a plush project, a resin project, a vinyl project and a metal project all in the same day in different aspects. Some processes take so long that you’re shepherding them along for months, especially plush prototypes. I can easily count 10 things we have going on right now in different stages of pre-release. In the next month, we’ll be releasing our third mini-bust, Bode Locke from “Locke & Key,” which I’m really excited about, he looks killer, as well as the 19-inch solid cherry Troll Witch’s Spoon and a severed head from Alan Robert’s “Killogy,” our first time working with him. He’s a super cool, great guy – part of what mention about being lucky to work with great people. We have one more severed head in the works for another project that I can’t talk about yet, but I’m wicked excited about. When it rains, it pours severed heads.

What are some of the geeky things you indulge in? (comics, TV, movies, video games etc.)

I’d love to say video games, but between the studio and two little boy, there isn’t the time. I also don’t get as much reading done these days . . . Once or twice a year, we have a movie night with some of our friends in comics – the last few years it’s been the Avengers movies – where we do dinner, watch the movie and dissect everything afterward. That’s always a great time. Not that I have much time to read them, but I also love building my hardcover graphic novel collection.

What is something that you want a potential buyer to know about you and your company?

That we don’t cut corners. We don’t produce a certain size to make it more affordable (cheesing out and doing a small Giant Key, for instance). We’re slavishly devoted to our source material – we want something to look like it fell out of your comic. We don’t want “Star Wars” and we don’t want “Deadpool.” (OK, so my wife probably would love “Deadpool.”) The point being, there are so many wonderful indie books out there right now and that’s really the water we want to swim in, those are the people we want to work with.

I can tell you from personal collecting that the products you get from Skelton Crew Studios are not only amazingly crafted but they’re incredibly reasonably priced. Visit Skelton Crew Studios to check out some of their amazing merch they have for sale right now and to learn even more about Israel, his company and what they do.