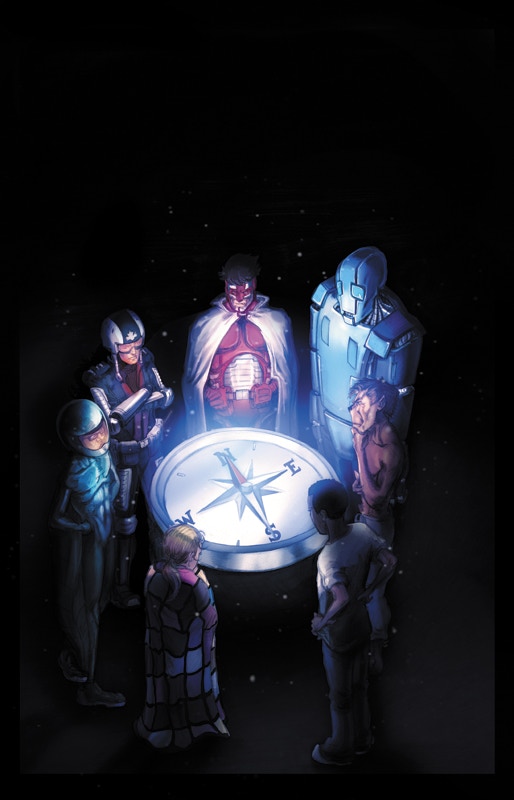 For those of you familiar with me, you’ll know that one of my regular comic book haunts is the Silver Snail in Toronto and one of my favourite things about the store is wandering in on days when I don’t realize something is going on and discovering something cool and new.

Last week was one of those days when I sauntered in to look at what was new and to chat with friends but wound up learning all about a cool new comic that’s currently up on Kickstarter. That comic book is called NORTH by Scott Sawyer.

The synopsis for NORTH as per the Kickstarter page is this:
“In NORTH, superheroes are more an “American thing”. Canada hasn’t had active super-heroes or villains for decades. South of the border, the American dream mentality has manifested in larger than life heroes and villains centered mostly in major cities around the States, while their humble cousins to the north had only a handful of masked heroes back in the eighties and that ended catastrophically…for all of them.

Current day: Toronto. Casey Van Allen, the offspring of the fallen legendary hero (Major Snow), has learned that the monster responsible for her father’s death (arch villain Lord Reign), is alive and well, living the good life after effectively staging his death years ago. Determined to follow in her father’s footsteps and to bring in the man who killed a national treasure, the young woman suits up and unearths a team of gifted misfits to help her in her mission.”

Scott’s layouts and pencils for each page were meticulous and gorgeous, making it hard not to shout “HURRY AND GET THE COMIC OUT SO I CAN SEE IT ALL” at him. There’s lots of glimpses of those pages up on the Kickstarter page and breakdowns of everything he’s doing to get the book into people’s hands so you can read more about that there. That being said, even though the Kickstarter is fully funded already, it’s important to support independent books like this being put out, as Canada still really doesn’t have a ton of superhero content being generated by small press publishers.

Sure, Spider-Man, Deadpool and Wolverine are Canadian but try to think of other well-known superhero characters that don’t come from Marvel or DC. We breed enormously talented writers and artists that get hired by big companies (rightfully so) but it doesn’t leave much room for them to create new Canadian heroes. Jason Loo is currently making waves with The Pitiful Human Lizard and there are a few other notable titles coming from Chapterhouse, but even so, it’s hard to name Canadian independent superheroes.

You can support NORTH for as little as $1 and get a big ol’ thank you from Scott for helping out in any way. A mere $5 CAD (which is basically a pittance to you American folks) gets you a digital copy of the first issue. Rewards go up from there (obviously) and include at the $500 level, original artwork of the NORTH characters as done by either Ramon Perez, Kalman Andrasofszky or Marcus To.