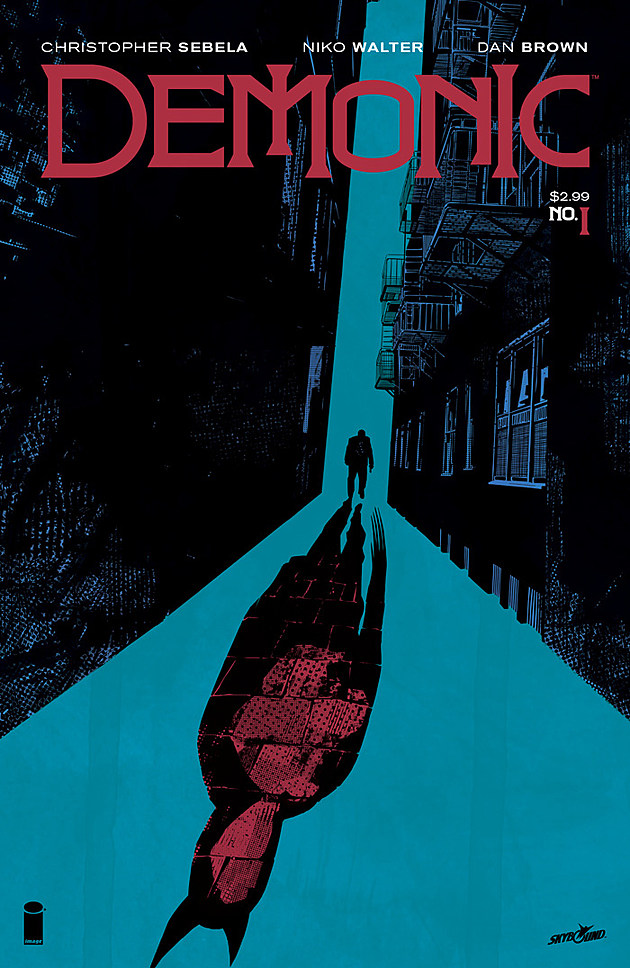 For me this has been the summer of Robert Kirkman—as I’ve been slogging my way (gleefully I might add) through The Walking Dead compendiums and the significantly slimmer volumes of Outcast. Zombies and demonic possession: what can I say, it’s been a fun summer. With new fall shows like The Exorcist on FOX, books and media that deal with demonic possession seem to be in vogue at the moment, and I was super excited when I found out that Robert Kirkman was co-creator of a new horror/crime comic: Demonic.

Demonic #1 introduces the protagonist, Detective Scott Graves: a NYPD cop with a dark past who is wrestling with his inner demons (both literally and figuratively). When the issue begins, we see Graves carrying on convincing banter with his partner, Detective Dani Fischer, and it has the feel of a typical crime narrative. However, demons make their way into the story very early on, and when Graves is propositioned by a bodacious blonde babe of a demon named Aeshma in order to save his daughter’s life, he’s faced with a tough decision: allow Aeshma to possess him at night and become her murder weapon or let his daughter die.

There is a lot of story going on here in this first issue, and it’s very dialogue heavy. While it doesn’t feel cluttered, the series seems to have a hundred different directions it could go in and they haven’t yet settled on a cohesive narrative. At this point, I’m not sure if I’m dealing with something more like Kirkman’s Outcast or a new superhero-esque comic.

The art is sharp and pairs well with the writing, but what I found really intriguing about the design is the varying size of panels. Throughout the issue, there are really tiny square panels that force the reader to focus on a specific detail—like the presence of a fly. This was unsettling (in a good way), and I think it works well for a horror comic. However, overall, the art wasn’t especially terrifying or extreme, and it felt more like a typical crime comic in that sense.

The Verdict
Wait and See. The first issue raises enough interesting questions to hook readers (who is the mysterious Novo? What happened in Graves’s childhood? etc.); however, Demonic #1 feels like it’s trying to do much. We can only hope that with time subsequent issues will begin to thin out the many plot strands and give us a more cohesive story to invest in.

Brie Larson Loves Captain Marvel Just As Much As We Do!