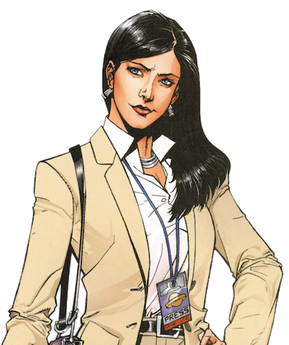 For this first official column we’re not going to be looking at a particular comic’s themes, or the way that it tells the story. While this will happen in time, the first thing to do is to look at the oldest relationship in all of comic books: that of Superman and Lois Lane. These two characters have been around since the very beginning of superhero comics both making their first appearances in Action Comics #1. Despite being around that long, and the two characters having their ups and downs through the years their fundamental importance as a couple is still not fully understood, even by those who run DC Comics as shown by the fact that the “New 52” version of Superman was dating Wonder Woman and not Lois Lane. This is a shame at best, and a travesty at worst for various reasons. First off, this is not a knock on Wonder Woman. Indeed, there’s a good argument to be made that Superman and Wonder Woman works better from her perspective than his based on how difficult it is for her to find a true equal. Instead, what Lois Lane provides is an anchor to Superman’s humanity.

First, let us make an obvious statement that still needs to be understood to understand Lois’s role in the Superman tale: Lois Lane is not a superhero. She is not capable of any of the physical things that Superman’s teammates on the Justice League are capable of. She won’t be jumping out of buildings to save lives, or get into massive fights that destroy cities. She is instead purely human. She’s an extraordinary one to be sure, but at the end of the day she is no more, side stories and individual storylines aside, a metahuman than any other person on the street in Metropolis. This matters, a lot.

The fact that Superman is in love with “normal human” matters because it is incredibly easy for Superman as a character to, paraphrasing Norman McCay from Kingdom Come, to get so wrapped up in the Super part of his name that he forgets the Man. There’s a reason why stories where Superman turns evil are around, and it is not just because they make for fun stories. They work because more than almost any other character in comic books, Superman is a god living amongst mortals. It is incredibly tiring for him to do so as best exemplified by this clip from Justice League: Unlimited

Yet each day Superman must go out and not just fight for humanity, but fight to hold onto his. Fans understand that he is able to do that because he is just better than the rest of us. That’s nice, but there is more. Superman has a tangible connection to humanity that will not let him forget what he’s protecting and fighting for on a daily basis: Lois Lane.

Superman’s love of Lois Lane reinforces his love for the rest of humanity. This may sound dramatic, but it does not make it any less true. It is true, in part, because his relationship with her is completely voluntary on both sides. Even if you’re parents are great, and his were, you don’t get to choose your parents even if they do choose you. Even people that hate their parents for legitimately good reasons, often have trouble not loving them. Thus Superman loves his parents because, well they’re his parents. He fell in love with Lois Lane because she is an exceptional human being. Lois fell in love with Clark Kent because she was able to forgive the deception over the years, and love him despite his flaws. This mirrors the relationship that Superman has with the rest of humanity. He could have rejected us all and gotten frustrated because of all our flaws, but he doesn’t. By the same token, the humans of the DC Universe could cower in fear at all they don’t know everything about him.

For some reason people fail to understand that Lois Lane provides an equal to Superman in ways that no other established character in the DC Universe can. Even if he did not have any super powers at all, it feels safe to say that Clark Kent would have made it to Metropolis and the Daily Planet as a reporter. With the caveat of depending on the era, and who is doing the writing, traditionally speaking Lois Lane is portrayed as the Daily Planet’s star reporter. She’s the one that goes after the big stories, and breaks them. If there’s a Pulitzer between Clark Kent and Lois Lane, there’s no doubt it belongs to Lois. Clark Kent is Superman because he’s an alien that came to Earth with these superpowers, and chose to use them for the good of humanity. He’s a reporter because in his soul he’s a journalist and wants to break the big story. Even if he had no super powers Clark Kent would still become a reporter. Thus in their mutually chosen profession Lois Lane is better than Superman. This is an equal in ways that Wonder Woman or no other female Superhero can provide.

The fact that Lois Lane is a better reporter than Clark Kent also provides a daily reminder of the potential of humanity. On a daily basis, even at earlier stages in his life when he is just pining after her, Superman deals with an extraordinary woman who is so passionate, so good at her job that she is almost borderline suicidal. Think of how many times Superman needs to save Lois Lane because in her rush to break the big story about some evil organization she puts herself in danger. It happens on regular enough basis to be annoying as a reader. Think about what this says about Lois though. It tells the reader, and Superman by extension, that nothing will stop her to get her story. This is a prime example of what sort of positions humanity is willing to put themselves in when they want to do the right thing.

Lois Lane keeps Superman human. She’s his anchor to humanity, and his better at their job. Writers and publishers that forget this, do both characters a disservice. They also show a disdain for Lois and Superman’s equal in ways that other characters (Wonder Woman) cannot provide. She is an example of humanity’s good, and Superman is in love with her. Without Lois Lane it becomes more difficult for Superman to keep a tangible hold on his humanity. Thus any depiction of Superman (not counting those where Lois has died) does itself a disservice by not putting the two together.

Stephen Combs
coralskipper@gmail.com
An amateur writers based in St. Louis who would eventually like to change the amateur part, Stephen can be seen at the St. Louis Renaissance Faire as a regular cast member or online in World of Warcraft as part of guild Gnomergan Forever .