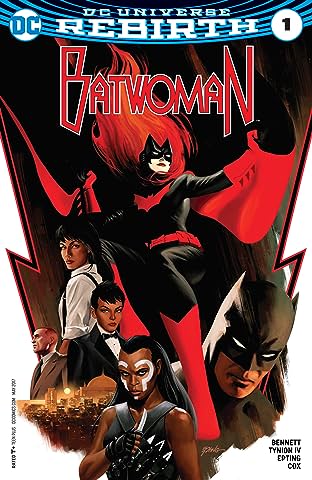 Fans of crime-fighting vigilante Kate Kane have been clamoring for a new ongoing series featuring the character since her New 52 title was cancelled two years ago, and with this week’s Batwoman #1, they finally get their wish.

Preceded by a Rebirth special published last month (that I reviewed here!), Batwoman #1 comes after her newfound role as a mentor in the pages of Detective Comics. The Kate we see here isn’t a newbie, but a bonafide professional who knows what she’s doing, and how she has to do it.

That’s not necessarily something her erstwhile partner Batman could get behind, hence Kate’s relative secrecy about addressing some unfinished business outside of Gotham. With Julia Pennyworth by her side, Kate heads to a mysterious island called Coryana, and quickly finds that there may already be trouble waiting for her when she gets there.

Batwoman #1 is written by Marguerite Bennett and’ James Tynion IV, whose combined sensibilities make for a good foundation moving forward. Confessed Batwoman megafan Bennett has already shown her knack for Kate’s voice in the 1940’s-set Bombshells, while Tynion involvement here ensures that her solo adventures will fit consistently into his own Detective Comics.

Maybe it’s because I just rewatched Casino Royale last night, so it’s still fresh in my head, but there’s a fantastic espionage feel to the proceedings here. If Batman is (ostensibly) the Sherlock Holmes of superheroes, then you could make an excellent case for Batwoman as James Bond. All the classic hallmarks of a spy story are set up here: a sexy lone wolf with questionable methods (Kate) and their snarky quartermaster (Julia),  international intrigue with an exotic locale to explore (Coryana), and the promise of a slinky tête-à-tête with a shadowy femme fatale (the woman known only to us as Safiyah). Come on, it totally works out! I’m really interested to see how everything plays out.

The art team from Batwoman: Rebirth #1 remains intact here, and they provide similarly great visuals. Steve Epting’s illustrations are action-packed when they need to be, and conversely subdued in the quieter moments. Jeromy Cox’s coloring compliments Epting’s art perfectly; there’s a notable flashback to Kate’s time in Coryana that’s rendered in black and white, except for Kate’s trademark red hair. It’s a striking accent that pops just the right amount, and even when we’re set in the present day with full coloring, she sticks out on the page.

The Verdict
Buy it! If Batwoman: Rebirth #1 was meant to set the table for us, then Batwoman #1 is an appetizing first course for what’s sure to be a tasty meal moving forward. Bennett and Tynion are a great writing team, while Epting, Cox, and letterer Deron Bennett make their script come alive through superlative visuals. I know I’m gushing here, but Batwoman #1 is an exciting new beginning for one of DC’s most interesting (and relevant) characters.