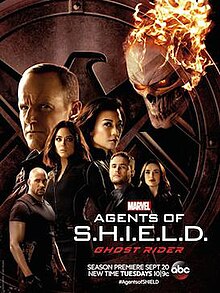 For the past three years, Agents of SHIELD has been dabbling around in the Marvel Cinematic Universe with little to no consequences. Sure, Nick Fury showed up at the end of Season 1, but other than that and the awkward name dropping, the show really felt like it was the step-child of the mega universe we all know and love. Sure, die hard comic book fans loved seeing obscure characters like Hive, Dr. Hyde, Blizzard and even Absorbing Man, but the show always dug deep into comic stories just to get a rise out of a very small cross section of Twitter followers and comic book bloggers. Hell, there are some references that dig so deep I didn’t catch them until way later, mostly because they mention one-off plot points that were discarded in the comics after that particular arc concluded. Sure, we get Quake, but even the writers weren’t confident in that enough to bring her into the fold until half way through Season 2, and the character herself didn’t really start making waves until deep into Season 3.

This is all frustrating to say the least. We all know that Marvel can do television right. Daredevil nailed the tone of the titular character within two episodes. Jessica Jones did it within half of one. I fully expect the tone and power of Luke Cage to be cemented and built upon all before the first title sequence starts up. We can stream all of these nearly perfect stories in full, and envelop ourselves within it over the course of a weekend. Agents of SHIELD however, is stuck on a traditional network with a week-to-week schedule to appease, and it feels like it hinders their storytelling abilities.

Season 4 opts to change all of that. The first big change in Season 4 of Agents of SHIELD is the move to the 10 pm timeslot. Some may say it is going to bury the show because ratings are harder to hold onto in that time slot (they are), or that Agents of SHIELD was gifted a 4th Season just so it can enter syndication (it probably was), but that doesn’t mean that the show is holding back. In just one episode it seems to be embracing the more open constraints of the time slot, showing way more gore than most of the first 3 seasons, with maybe the exception to Coulson losing his hand at the end of Season 2.

All of this is because of the addition of one character: Ghost Rider. This isn’t your crazy-eyed Nicolas Cage Ghost Rider either, but the new Ghost Rider introduced in 2014. Instead Johnny Blaze the flaming biker from hell, we get Robbie Reyes, an LA local caught between gangs just trying to do right by his brother. Oh, and he drives a bad ass ’67 exposed engine Charger. Like the Netflix series mentioned above, you get everything this Ghost Rider is in one episode. The preview from next weeks episode seems to show more backstory on Robbie Reyes, so we will see if his MCU iteration is tortured by the Spirit of Vengeance or Eli Morrow. I have gushed about my love for Robbie Reyes on Twitter and in the Staff Pick of the Week before, and I am so happy that so far the TV iteration is doing Robbie Reyes justice.

But this is still a show called Agents of SHIELD, and not just Ghost Rider. Following the solid, but not mind blowing, ending to Season 3, Quake is on the run from SHIELD and the core cast of characters has been split up by the new director. Mack and Coulson are out in the field again, testing the limits of their new ship, and honestly, it is probably one of the best changes they could have made. Like Tony Stark said, his first name isn’t Phil, it is Agent, and it is great to see him back in that role. Simmons is playing the power card and trying to keep her head above water in the new hierarchy of SHIELD. Even though Fitz and Simmons are now a pair, Simmons’ favor with the new director is pushing the couple further away. And May is back to training more bad ass agents. The mix up in staff is nice, and it does disrupt the status quo, but it isn’t hard to see that these people will end up working as a team yet again. Although this time it will be with understanding of each other instead of Coulson keeping secrets from the people he values the most. Such a simple act of moving Coulson back into the field has made it so he isn’t so nebulous in his allegiances or motives, and it is nice to have everyone playing for the same team again, even if they are fragmented.

Watch It. I would still like to see Agents of SHIELD actually interact with the larger MCU outside of mentioning Ultron or the Sokovia Accords, and Ghost Rider is a nice step in that direction. They’ve done the definitive version of a new character and Agents of SHIELD has never felt more like Marvel’s Netflix counterparts. Hopefully this season continues to fire on all cylinders, because it is off to a great start.

Ryan M. Holt
ry.holt@gmail.com
I am a Colorado based freelancer and graphic designer who loves games, movies and technology. I love seeing cool characters do cool things. My wife, son and two stupid cats keep me grounded. Follow me on twitter @RyanMHolt

Arrival Arrives in Your Home on Valentine’s Day