In my last spotlight on Dresden Codak, I looked at the first five years of the strip and examined how artist and writer Aaron Diaz had developed through his early work and first storyline: Hob. It was a comic that hooked me initially with its quick-witted philosophical approach to science-fiction, and soon had me appreciating gorgeous art and impressively fluid page layouts. It gave me a lead character I truly admired in Kim Ross. Today, I’ll look at the storyline which makes up the latter half of the site’s output, Dark Science, and explore in depth a comic that continues to fascinate and inspire as Diaz pushes new boundaries in comic form.

Dark… Science? What Is This? 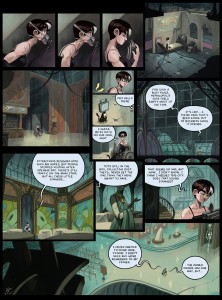 Dark Science is a comic more worthy of serious study than review. It is a beautiful example of sequential art, meticulously planned and crafted since 2010 as a magnum opus fulfilling the promise of what Dresden Codak has always set out to accomplish. Aaron Diaz is the head and hands behind the project, a creator who seriously strives for excellence within his work and has openly discussed the process behind his recent comic in a series of thought-provoking essays available on his blog. After completing Hob in 2008 and spending the next two years focussed on one shot stories, Dark Science can be best described as a turning point for a creator who had obviously grown. Diaz had honed a unique and consistent art style which didn’t hold back, and Dark Science pushed even those limits to new horizons in terms of art quality and storytelling expertise. As it set out on a grand storyline of transhumanism, legacy, and personal identity, it soon became clear that this was the most ambitious work yet to appear on the site.

In Dark Science, we follow Kim Ross as she travels to Nephilopolis, a floating city built out of a World’s Fair on the literal shoulders of giants. The city is in the process of mourning the death of its architect, Kaito Kusanagi, who also happened to be Kim’s long-estranged father. In Nephilopolis, Kim is surrounded by forces and obstacles both foreign and eerily familiar. It’s a city where social interaction and career opportunity have been systemized to an oppressive degree, and Kim, genius-level roboticist but eternal outsider, finds herself at a loss of how to succeed in such an intrusive environment. Almost immediately after her arrival, Kim finds herself failing. Singled out and stumbling through the city’s shadows, Kim becomes embroiled in a dark conspiracy with ties to her own history and future.

The story involves worldbuilding on an epic scale. The art-deco aesthetics of Nephilopolis exemplify its vision with architecture, fashion, and culture all unique to Aaron Diaz’s world. Where some cities may have a Department of Water Treatment, Nephilopolis has the Department of Opposition. Where some have a Department of Finance, Nephilopolis has the Department of Inquisition. Populated by post-singularity cyborgs, cats with television heads, and an imposing bureaucratic authority, there’s no mistaking this location for anywhere else, especially not the small-town setting of Hob. Diaz cleverly handles the few inconsistencies with Hob by making it clear that the earlier storyline took place in a less developed part of his world, with Kim’s initial journey to Nephilopolis after a lifetime away being a moment of awe and wonder echoing of the feeling of expanding scale I got reading these opening pages for the first time.

Who Is This All About? 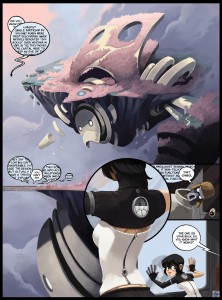 The key difference between Dark Science and Hob is that Dark Science as a story is personal to Kim on a fundamental level. Nephilopolis is her father’s city after all, the place where the weight of that legacy feels heaviest and everything seems to revolve around the concept. When Hob and other earlier strips dropped tidbits of information about Kim’s past or potential future, they were essentially easter eggs for the reader to piece together: completely optional and tangential to enjoyment of the story. Dark Science on the other hand thrusts Kim forwards as the central character in more than just happenstance. It is a narrative built around her story. Those potential futures in earlier strips? It is this story to which they are referring. In including ideas which were built towards throughout his earlier work, Diaz made sure the emergent plot was earned in the reader’s mind. Kim’s journey feels inevitable, not in the sense that I can guess where it’s going, but in its concepts being foreshadowed since the beginning of Dresden Codak in 2005.

The use of supporting characters in Dark Science also shows Aaron Diaz’s growth as a storyteller as he broadens his scope to put emphasis on bigger stories and deeper worldbuilding through alternative perspectives within the story’s arc. Dark Science showcases characters like Vonnie and Balthazar, characters who stand so far above Hob’s Tokamak Twins in terms of having developed arcs of their own that a comparison hardly makes sense. Vonnie in particular has an arc that’s explored in earnest; starting off as the ultimate insider to counterpoint Kim’s outsider experiences, she finds herself not only disgraced as the story progresses, but spiralling downwards because of her unerring loyalty to the system. Thematically, this effort to tell the story through character rather than concept takes Dark Science to another tier. But it all comes back to Kim.

How Does It Look? 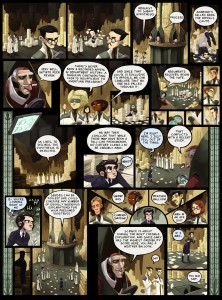 Diaz’s art in Dark Science is meticulous. Before Patreon assistance sped up the process, a single page of Dresden Codak would sometimes take months of work to complete. The time and effort that goes into every inch of the comic page is self evident. Panels are as detailed as required, dictated by the emotion and tone of the moment. While the majority of the panels are in Diaz’s strikingly painted style, he understands the impact of the occasional graphic inconsistency. Moments meant for comedy get clean, simple cartoon lines and occasionally characters are mere stick figures, showcasing the thought that goes into making Dark Science’s characters distinguishable even in their most simplified forms. More sombre and serious moments are imbued with all the necessary detail you can dream to get lost in, and colours work hard to convey a mood on the page. It’s not effort for effort’s sake. These are storytelling decisions. I’m often floored by how much effort has gone into a single panel that takes up a fraction of a page just because Diaz has decided that detail was the best storytelling decision for the moment.

Creative panel layout is another signature aspect of any Dresden Codak page, with Diaz consistently attempting complicated patterns that push the reader to look at a page in untraditional ways. Every part of the page works together to tell the story, from the smallest interlocking panels to large artwork spread over the entire page. It all combines with extremely clear lettering to guide the reader’s eye. It is one of the greatest strengths of the comic as a whole and while Dresden Codak was already notably accomplished in this area, Dark Science is consistently masterful in its willingness to take creative risks.

Why Do You Care So Much? 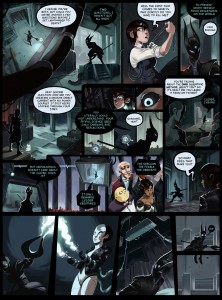 The main reason I care so deeply about this comic, beyond the beautiful art and character driven story, is because Aaron Diaz is unafraid of the word feminist. Both within the confines of the comic and in his frequent participation in social media, he has made his views on the subject extraordinarily clear. He believes female and minority characters have been given a raw deal in most media and deserve better treatment not just in comics but in storytelling as a whole. To that end, Dark Science is an inclusive environment, incorporating people of colour and women into the forefront of the storyline. Kim herself is a half-asian woman, and characters like Asmodea or Vonnie are not only complex female characters with strengths, flaws, and motivations of their own, but they are crucial to the core of the story. Including these characters without spotlighting their “difference” and allowing them to exist by virtue of their role in the story, Diaz’s world becomes rich, diverse, and truly a breath of fresh air among other comics in his genre.

Furthermore, and perhaps more importantly, the actual telling of the story supports a feminist reading in how Kim accomplishes her goals. Rather than putting Kim in situations of violence, Dark Science has Kim’s story take its cues from Intelligent Adventurers such as The Doctor and Characters of Heart like Mrs. Brisby in Don Bluth’s The Secret of NIMH. Kim uses both her mind and her inner emotional strength to work her way through obstacles in a compelling, rationally based narrative. The result is a storyline built less on violence and conflict, and more on figuring things out and choosing the power of one’s own will. It produces a more interesting, philosophical story and that’s why I’ve been so fond of Dresden Codak from the start.

But There’s Much Before Dark Science… Where Do I Start? 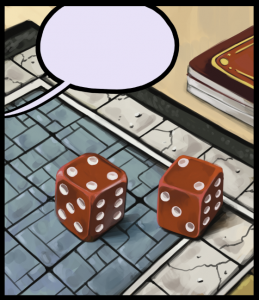 Dark Science is a self contained story, referencing the events of Hob in a loose continuity that rewards longtime fans, but it’s intended to stand alone. All the information needed for Dark Science is contained within the story itself: a smart move which makes this comic easily recommendable to friends. Page one of Dark Science is a fantastic jumping on point for new readers of Dresden Codak and will allow you to quickly catch up and follow the story as it moves forward.

If you’d like to support Aaron Diaz, his current work has been primarily supported via Patreon, which allows him to put up a new page of Dark Science roughly once every two weeks. Patrons will gain access to exclusive content, progress reports on new pages as they are created, and is the best way to follow Dark Science as it continues.

Toronto After Dark: The Villainess Review