A review by Anelise Farris 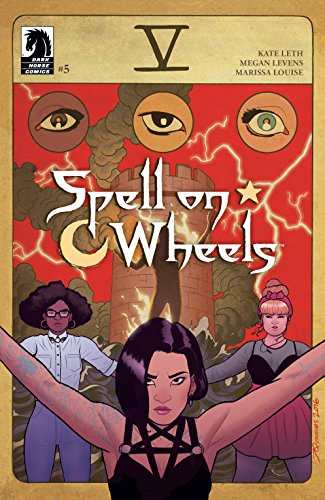 Spell on Wheels #5 releases this week, bringing the five-part miniseries to a close. The adventure began in October when issue #1 was released, and, while October might seem like the expected time for some supernatural fun, Spell on Wheels gives readers a story of three witches who are anything but stereotypical. Claire, the retro-femme hipster, Jolene, the tattooing punk rocker, and Andy, the lovable geek, are three roommates who set off on a road trip to recover stolen magical artifacts.

The first issue of Spell on Wheels introduces readers to Claire, Jolene, and Andy, and from the start, you can’t help but care about these characters. Kate Leth and Megan Levens do a fantastic job of giving each character a distinct voice and appearance that is instantly likeable. And when the road trip plot is set in motion after the theft, their tight-knit bond is communicated not just through their easy interactions and detailed facial expressions, but also through their firm commitment to helping each other. Issues #2 to #4 move at a smart pace, taking us along for the ride to new locations: the party of Arthur Boldram, a shady, retired artist, to suburbia and a non-magic housewife who has come into contact with the dark arts, and to an abandoned house in an eerie, rural area.

The suburban setting of issue #3 serves to raise the stakes in the series as Spell on Wheels takes a noticeably darker turn, and gives a greater depth to Andy: the newest witch who is, albeit a little too naively, willing to take some risks. This is a smart move, not only as it is issue #3, the halfway point, but also because the team behind this comic effectively balances the darkness with lightness and the magical with the mundane. Additionally, the darker magical elements ease us into the setting of issue #4: the more conventional haunted house. And here, at the second to last issue, the supernatural energy and tension in the story is amped way up as we move closer to the new moon deadline (and conclusion!): can the girls recover their artifacts before it is too late?

Eager for the answer, but not for the mini-series to end, I read this final issue as slowly as I possibly could. And I am happy to report, as the conclusion to the mini-series, Spell on Wheels #5 makes all the right moves: it answers lingering questions about family history; it shows Claire getting some much needed revenge on a crazy ex-boyfriend; and it manages to produce a final twist that left me pleasantly surprised. As with each issue, the team behind this series work so well together: the writing has a vibrant energy and ease, and the art, while youthful and fun, is balanced by a great use of shadow and depth. Kate Leth and her crew have produced a comic about witches that is both smart and affecting, and I hope the trip isn’t over yet!

Verdict:
Buy It! From the subtle use of magic and diverse characters to the vibrant art, Spell on Wheels is a mini-series that is well worth your time. This is a story about witches, but, even more than that, it is a story of a totally believable (and enviable!) friendship.